Brazil’s deforestation has many negative effects such as how it significantly harms the land, air, and wildlife. In fact, between 1970 and now more than 230,000 square miles of the rainforests have been destroyed. As of 2008, only about 82.3% of the Brazilian rainforests remained uncut.

Brazil’s deforestation also effects the air. Like I said before the trees keep the air warm during the night and cool during the day. They also protect you from things like the sun’s harsh rays. We need the plants and trees to absorb harmful gases like carbon dioxide in exchange for oxygen. If we don’t have vegetation to produce oxygen then there won’t be breathable air in the atmosphere. 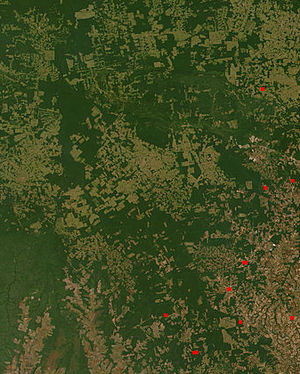 By the end of the 1980’s the process of clear-cutting Brazil’s rainforest had become a global issue. The amount of trees being cut down has gotten so big that you can see it from space. At the rate of how fast the trees are being cut down, in a hundred years all of the world’s forests and rainforests could vanish completely.

What’s your opinion on the deforestation of Brazil? Let me know by leaving a comment.